Yesterday the crew and cast were filming down at Morgans Tavern - which is the fictional "Neptunes Bar" in the hit comedy series.
You couldn´t miss it really - the Primoti and generator vans are the main give away! Well that and the crowds that are gathered at the entrance, hoping to catch a glimpse of one of the cast as they make their way into the green "rest tent" in between takes.

The extras are all on call from 7am - and boy is it chilly and still dark at that hour of the morning - about 50 were on set today! The sensible ones came appropriately dressed as they know what to expect - a lot of hanging around outside. They sit around in a small cordoned off area in front of the entrance until Helena, the extras co-ordinator gets the thumbs up to send a certain number in over her walkie talkie.

As they entered the bar I even witnessed a few passer-by´s trying to sneak in with them, hoping not to get noticed....

The cast members present will vary each day but one person who you can guarantee to be there is Asa Elliott - Neptunes star attraction... and listening to the waiting crowds outside chanting his name every so often they are hoping to get a glimpse of him too!

But the ones you must feel sorry for are the props team... who have to be there at an unearthly 5am to re-arrange and dress the inside before the cast and crew arrive. I wouldn´t be surprised if they came across some revellers still in there when they arrive at that hour! 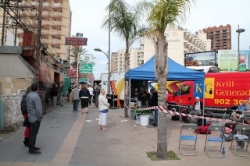 Filming has to finish by 7pm at the latest - this enables Colin and his team to put everything back in place before Morgans Tavern opens to the public! They have photographs of all areas to ensure that it is laid out exactly as it was for continuity, as sometimes one scene is shot over several days. Each cast member is also photographed with the outfit they are wearing - including accessories for the same reason. It wouldn´t do to see say Janice in one shot with a certain pair of earings then in the next wearing a completely different pair!

They are filming there again today.... so if you are a fan pop on down - you never know, you may catch site of some of the cast!
In fact to add to that, Steve Pemberton, Jake Canuso and Tony Maudsley all came out several times to say hello to the waiting fans and even had pictures taken with some of them - so you never know....