Benidorm 6 crew out on location

The Benidorm series film crew were out on location this afternoon - and there was no mistaking where they were, due to the mass of people! They had taken over one of the bars on the Levante front and turned it into a beach bar. 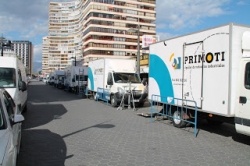 The first give away sign was the taped off side road and then the subsequent arrival of the Primoti vans and generator! Colin and his prop team had arrived earlier in the day and erected a beach bar on the terrace, which had been made up in workshop under the pink house. I saw it yesterday in pieces when it looked nothing like the finished prop!

I spoke with Pere, the Spanish production manager earlier in the afternoon and he told me that initially they had wanted to use the Tiki Beach bar further along. However it proved virtually impossible as it would have caused too much disruption as it is such a busy bar - so the next best thing was to recreate a "tiki type bar" for this scene.

The clock was ticking and everyone was buzzing with anticipation as to which cast members would be appearing - and it wasn´t too long before the silver grey mini bus pulled up outside and they were to find out!

Spanish holiday makers passed by totally bemused as they watched the crowds cheering and snapping away on their cameras.
The local police were also on hand, taping off areas to contain the fans and directing traffic in front of the bar - this is all required by law when filming in public areas and licences have to be obtained beforehand.... one of Pere´s numerous responsibilities. He was there to oversee that everything was running smoothly...

As well as Kenneth and Liam there was another surprise in store for the crowds.... a new face! And who should it be but actor Roger Lloyd-Pack - probably best remembered playing Owen in "The Vicar of Dibley" and Trigger in "Only Fools and Horses". His more recent roles include Bartemius Crouch in "Harry Potter and the Goblet of Fire" and appearances in the television series "The Borgias" and "Inspector George Gently".

I´m unsure whether Roger is going to be a regular cast member or one of the many that make one off cameo appearances.... which are highly sought after these days. Today´s beach bar scene is going to appear in Episode 2 of this current 6th series, so look out for it when it is aired, especially if you were there!

The crew have been out and about all week filming at various locations - yesterday they were at a massive unused carpark on the outskirts of Benidorm, heading towards La Nucia - who knows where they´ll crop up next, so watch out!

Whilst I was at the beach a lady by the name of Joy approached me asking if I was Irena - she recognised me from this blog and also my appearance on Come Dine with Me! I was delighted as she told me that she reads my blog every day and finds it very informative and interesting. She was in Benidorm on holiday with her husband, daughter Amy and friends from Dungannon in Northern Ireland and by pure coincidence staying in the apartments overlooking the bar. She very kindly invited me up to take some photos - which is how I came by to snap that excellent arial shot, so many thanks Joy!