Start of the Benidorm Fallas

It´s fiesta time again..... a month doesn´t seem to pass without there being some kind of celebration here. This time as well as being St Patrick´s weekend for the Brits, which has been well supported by the local bars, it is Spain´s most noisiest festival - Las Fallas. 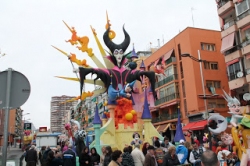 The various penya´s spend almost an entire year designing and building the beautifully crafted effigies. Many are satire based, mocking politicians and those making the Spanish headlines but unfortunately they all end up in flames on the 19th - the festival of San Jose and also Spanish Father´s Day! Seems such a shame as a great deal of effort goes into making them. 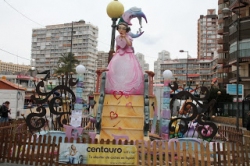 But it is a tradition that has been going for decades, and one of the nicest sites is seeing the young girls all dressed in their traditional costumes - something unheard of back in the UK. One old tradition which I remember growing up was May Day and dancing around the Maypole - now it seems to have disappeared, probably for fear of upsetting the growing Muslim communities!

Here in Spain they don´t pander to the minority  ... and rightly so. They keep up customs and traditions which is how it should be.

The beautifully handmade dresses which the girls wear cost literally hundreds of euros. A friend of mine had to have one made for her daughter about 4 years ago and paid over 800 euros then. It is a real honour and privilege to be chosen - but don´t go thinking that you can hand it down to siblings or other family members to save money .... that´s a definite no no!

They start them off really young here - you are either chosen as one of the fiesta princesses, are part of the band or belong to a penya - which entails fundraising throughout the year. There is no time to be loitering on street corners here - they are always too busy preparing for the next fiesta!

The official "planting" or unveiling of the three Fallas in Benidorm was on Friday evening. One stands at the Plaza Triangular - top end of the Avd Mediterraneo and the Calle Gambo, another at the Rincon de Loix end - opposite end of the Avd Mediterraneo, near to Burger King at the cable ski end of Levante and the third is on at the top of Calle Tomas Ortuño - where the huge roundabout is with Molinos, just past Hospital Clinica Benidorm in the Old Town.

Tuesday 19th is a Bank Holiday here and shops will be closed - in fact, the supermarket chain Mercadona will only be open till 14.30pm on Monday and closed completely on Tuesday, so don´t get caught out! All the restaurants will be packed to bursting point with Spanish families, out celebrating Father´s Day - most will NOT be offering Menu del Dia´s but optimizing on the celebrations!

There will be a flower and float parade at 17.30pm on Tuesday 19th and all of the models will be burnt. The times vary for each one;

Calle Tomas Ortuña - the children´s one will start at 23.00pm then the adult one will follow at 1.00am;

Plaza Hispanidad (otherwise known as Triangular with the massive rubber tree) - this one will be burnt at 12.30am

So if you are energetic you could watch the two being burnt at the Rincon end then race down to the other end of the Avd Mediterraneo and watch the big one going up in flames. Whereever you go, wear comfy clothes, wrap up warm as it will be very cold and don´t take too many valuables with you.