RIP Kenny Ireland - it was announced today that the actor, who played Donald in the Benidorm series, lost his very long battle with cancer at the age of 68. He was written out of the 7th series in June, during filming to concentrate on his treatment. He will be sadly missed by all.....  below is an interview I did the him back in 2011 while filming series 4. 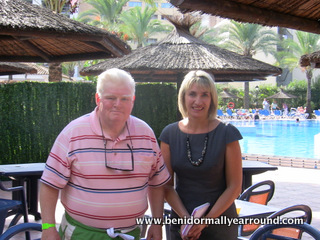 Scottish actor and theatre director Kenny Ireland plays Donald Stewart alongside his screen wife Jacqueline (Janine Duvitski) portraying a couple of aging swingers much to everyones ammusement in the Benidorm series - and constantly keep the viewers ammused with their tirade of hilarious one liners. I know its only acting but on meeting Kenny you couldn't find such a complete opposite if you tried - which is a great credit to his acting abilities.

Kenny is one of the original cast and has been in the series since the beginning which was first aired  in 2007 and offers an almost "Carry-On" style humour (for those old enough to remember the Carry On films). Its a far cry from anything he has done before - he is originally a theatre director and has some prominant credits including Guys & Dolls, Romeo & Juliet, Macbeth, Much Ado About Nothing, A Midsummer Nights Dream amongst the few. But he has also been acting since the 80's appearing in  many TV series including Victoria Wood As Seen on TV, Acorn Antiques again with Victoria Wood, House of Cards with Ian Richardson and also many Scottish productions including Taggart and Monarch of the Glen. 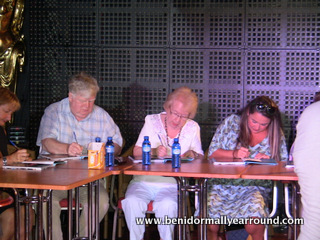 Kenny is originally from Glasgow but lives in London with his wife and when not working is kept busy with his 4 grandchildren ! So no rest for him ....
During the breaks in filming by the poolside Kenny passes the time by getting his ebook out .... or sometimes enjoys a game of  backgammon with fellow actress Shelley Longworth who plays Sam - but only for fun! Once filming has finished here he will continue working on an adaptation of "The Cone Gatherers" by Robin Jenkins... the tale of two brothers who gather cones on a Scottish estate during World War II. He was present with many of the Benidorm Series cast for the book signing of Derrens book "The Benidorm Guide to a Happy Holiday" in 2011 - where Donald and Jaqueline offered advice on how to make your holiday go with "a swing" !