The Rich Bitch Showbar in Benidorm 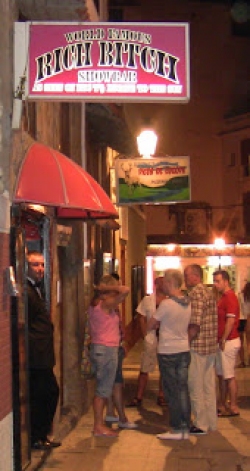 "Jordan Rivers" aka Gary Brown is now most famously recognised as the vicar that married Madge and Mel on Levante beach in ITV's award winning comedy series "Benidorm" - now about to embark on a  record 5th series with filming due to commence later this year !
But this was not Gary's only "brush" with television stardom ...... the BBC followed him and partner Michael Beddow for over a year filming an 8 part documentary "Escape to the Sun" during 1999-2000 when they decided to uproot from their native Midlands and move to Benidorm, where they opened a new drag showbar called "The Rich Bitch Showbar"situated in the Old Town.

Many viewers have wondered what happened to them since as there was never a follow up ..... well they are still thriving and entertaining both visitors and locals 6 nights a week at The Rich Bitch.
Gary's love of showbiz has been lifelong and was kick started when he won The Daily News Entertainer of the Year in Birmingham catapulting him to stardom and led to him working all around the world at some of the most exotic locations and prestigious venues and cruise lines.
But fed up with all the instability and travelling around Gary and Michael decided to move away and settle down, choosing Benidorm to embark on a new chapter in their lives.... and what an adventure it has been ! 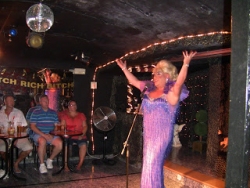 The Rich Bitch is situated in the heart of the Old Town and is reminiscent of a Soho Nightclub - with a "booted and suited" doorman ticking you off  the reservations list ..... it is essential to book as the venue is intimate with a max capacity of 97. 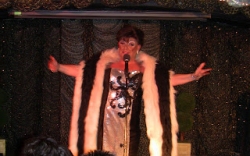 The humour and atmosphere of the show is similar to that of the late Foo Foo Lamar's Palace in Dale Street, Manchester. The jokes are on the risque side but will have you in stitches - if you are of a shy disposition do not sit at the front is the only advice I can give! The song repertoire is well performed by "Jordan Rivers" and her side kick Miss Shape with a dazzling array of costumes. Within the performance there are short interludes which allow the smokers to pop out for a quick one - something that had to be introduced following the national smoking ban in enclosed venues. 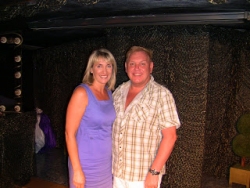 It is a unique place and one that will remain memorable with you ..... I haven't laughed so much in a long time.   There was a mixture of couples and groups in the audience and is an ideal stop for stag and hen parties - and if you have a birthday or anniversary have a little word with Michael behind the bar.

The show runs until 25th July and then closes for a well deserved summer break, re-opening on 3rd September. To make a reservation call 666 055 906. It is easy to find but unfortunately as it is a pedestrianised area a taxi will not be able to drop you off right outside.