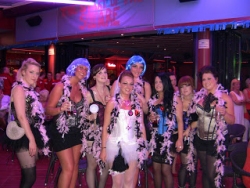 Well its that time of the year when wedding planners are all in a flutter in the lead up to the  carefully planned Summer wedding. Brides magazine quote a lady calling the office wanting advice on "the most stylist hen-do possible" Her budget? "About £1000 a head for ten close friends" !!!!! It is even reported in todays tabloids that Mark Tindall, fiance of Zara Phillips has racked up a £12,000 bar bill on his alcohol drenched stag do in Florida! Whilst Brighton has become the newly crowned hen-capital in the UK Benidorm has been a popular Stag & Hen destination for years. 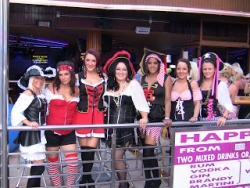 I ventured into Benidorm on Saturday night to track down some of the newly arrived groups - and my goodness there were many. The groups start arriving at "The Square" from around 10pm .... having spent the day either by the pool or on the beach relaxing and preparing themselves for the night ahead. Many of the groups have some kind of theme - an awful lot of thought goes into the planning. Other groups that aren't themed  wear specially printed T-Shirts with the bride or grooms picture and name on them. I stopped to speak to a few groups and ask them where they are from and how long they had come to Benidorm for. 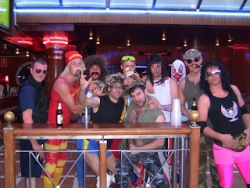 The majority of the groups had arrived on Friday night and were flying back on Monday afternoon - therefore planning on 2 nights of partying. And the airline of choice in all cases ... Ryanair! Love him or loath him - when he's offering his tax-free fares you can't get to Benidorm any cheaper! I think that I'll write to Mr O'Leary suggesting that he offers a special Stag & Hen package whereby the bride/groom to-be travels free with a party of 10 or more! The groups I spoke to came from South London (Pirate girls), York (Blue haired group), Leeds (Stag action hero's) and Glasgow (Prison Officers).
They all came to Benidorm because you can have a great time and not pay a fortune to do so - with the cost of weddings as high as they are it doesn't leave much for the do's but in Benidorm you can certainly party on a budget and not feel you are missing out! There is no charge to get into Benidorm clubs (Bahama's, Beachcomber, Stringfellows for the boys... there are so many that you need 2 nights to get through them all ) and inviters hand out promotional tickets for free cocktails or 2 for 1 drinks to entice you into their clubs..... in any UK city you would pay £20 just to get into a club!  For that you'd have your drinks money for half of the night in Benidorm - maybe I should have tipped off Mr Tindall ! The clubs all have security outside to ensure that there is no agro and to keep order - the local police also patrol in the early hours. 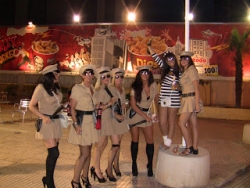 When talking to the groups of Hens inparticular I spoke to them as I do to my own 18 year daughter when she goes out clubbing: Stay together and look out for each other, never leave your drink unattended  but have fun and enjoy yourselves. Well girls and boys, I certainly hope that you all had a wonderful and memorable time in Benidorm and that you make your flight back home but most importantly that you tell all your friends what a great place Benidorm is and come back again!