Ryaniar are once again on the warpath - this time with the Spanish airport authority, AENA.
AENA are insisting that the airline must comply with new rules that state passengers’ rights to carry their duty free purchases  in addition to their handluggage. Many a time flying out of Alicante airport I have witnessed passengers trying to stuff their duty free into their 1 piece of small luggage. Ryanairs dimensions are already the smallest out of all the airlines.

The Spanish government recently introduced a new law which bans airlines from enforcing one piece of hand luggage!  Ryanair is the obvious airline which springs to mind for making passengers pay extra to take any additional purchaes on board that they can not fit inside their handluggage. 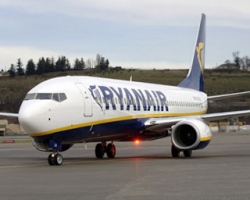 "With this new law, passengers are allowed to take an extra bag with purchases onto their flights. We have communicated strongly to Ryanair that they must obey the rules. When we told them, they said they would comply with Irish law rather than Spanish law, but we said that this was not acceptable, and we repeated that they must follow the rules in place at Spain’s airports.”

This is a rather presumptious statement  on Ryanairs behalf- one normally follows the local law of the country. For instance, it is widely known that kissing and drinking alcohol is forbidden in public places in Dubai so you comply with this law ( unless of course you are Ryanair by the sounds of things)
An AENA spokesman stated that the one-bag rule has had a big impact on sales...... but then perhaps they need to review their prices too - take a look at our previous article entitled "Airside at Alicante airport!

This new issue further complicates Ryanair's relationship with AENA who insist that the airline uses airbridges for boarding all flights rather than stairs.Ryanair have threatened to cut  almost 80% of all flights to and from Alicante airport from the end of the summer if they are forced on this issue. However, AENA only charge aprox. 30 cents per passenger to use the airbridges - something that most passengers would be suprised to know thinking it would be much higher. Maybe we'll soon be seeing yet another additional charge on top of the "£2 cancellation levy" which was introduced at the beginning of April.