The Fallas are a traditional Valencian celebration in honour of St Joseph. The term "falles" refers to both the celebration and the monuments created during this time.

The biggest and best celebrations occur in Valencia, the birthplace but many towns in the Valencian community have there own parties.
These photographs show the amazing fallas created
in Valencia  last year..... many stood at more than 20 metres in height ! They are created and built according to an agreed theme and take many months to construct. They are made from paper, wax and wood.
In Valencia there can be up to 500.
The climax of the week long celebration is final day known as "La Crema", or burning of the fallas, which happens around midnight on the 19th.
The last day of the Benidorm Fallas is on Saturday 19th March - St Joseph's Day and a public holiday here so most shops will be closed (don't forget to do your shopping on Friday!)
18.00 - Parade of floats .... Starts at C/Marques de Comillas, Avd de los Almendros, C/Marte, C/Venus, C/Ruzufa, Avd Martinez Alejos, Avd Alcoy and finishing in Avd Bilbao.
23.00 - Burning of the 3 children's fallas in Avd. Ametlla de Mar;  Pl. de la Hispanidad & C/Tomas Ortuno.
12.00 - Burning of the main "Falla de Loix" in Avd. Ametlla de Mar (infront of Burger King near to Ruidor and Regente Hotels.
12.30 - Burning of Falla "Benidorm" in Pl de la Hispanidad
1.00am- Burning of Falla "Els Tolls" in C/Tomas Ortuno.
Remember if you go to wrap up warm and keep your valubles close by ..... due to the crowds pickpockets will be out so best to leave things at home.... and the writer of this blog speaks from experience. His top of the range HTC phone was "picked" at last years Valencia fallas ! You have been warned. 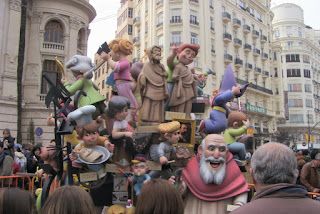 We will publish photos from this years Benidorm fallas after the event - check back on Sunday!