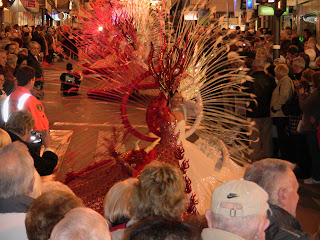 If you can't get to Rio to see the Mardi Gras carnival then the Carnival in Benidorm is your next best bet. The traditional carnival celebrates the beginning of Lent and the parade is held on the Saturday before Ash Wednesday, this year being 5th March. The main street leading up to the Town Hall Square were awash with locals and tourists jossling for pole position to see the amazing procession. Massive speakers had been erected along the entire route and the volume of the beat could be felt through the pavement! Revellerers took in the atmosphere, dancing and swaying  but many of the older spectators held their fingers permanently in their ears to try and drown out the sound. From 9pm the local police drove up and down the route on their vespa's clearing any waiting taxi's and parked cars to make way for the parade. 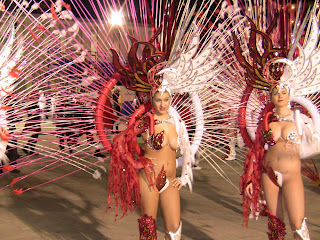 The procession kicked off at 9.45pm starting from Calle Marte y Venus, down the Calle Ruzafa and onto the Town Hall Sqaure. The first out was the "Ipanema" penya ..... with spectacular and jaw dropping costumes which "titilated" the crowds. Camera's flashed and people cheered as they swept past dancing to the beat of the music.Then followed a further 59 themed fancy dress parades.... amongst these were Toy Story, Flintstones, Barbie, Mad Hatters Tea Party, Musketeers, Snow White & the seven Dwarfs,The Incredibles,Valencian Ball and many others.... some of which you can view here. 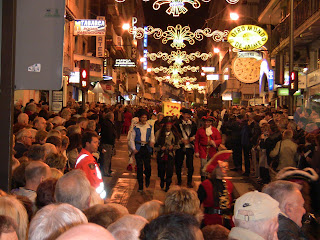 Some of the costumes were so elaborate they must have taken months to create and sew. The procession took about 2 hours and culminated in a fantastic firework display which was set off from the rooftop of the Town Hall .... and was followed up by a live rock concert in the square by "Crash".
Bars and fast tapas were available in the square and the partying lasted until the early hours of Sunday morning ensuring that no-one slept through the festivities! 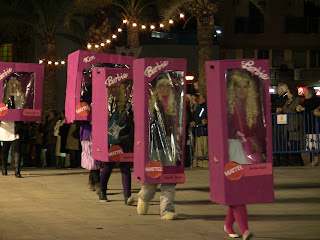 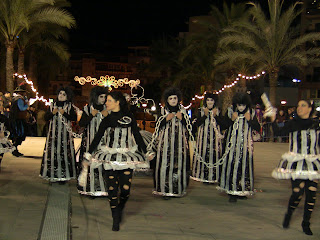 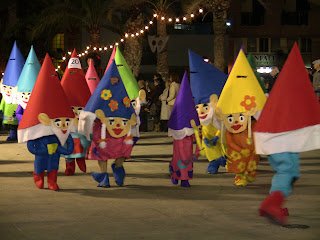 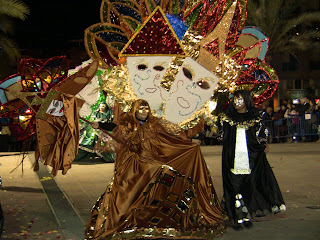 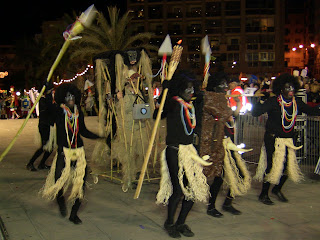 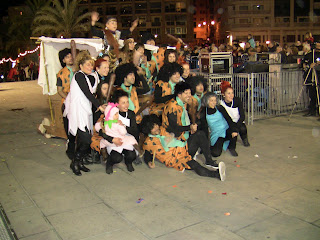 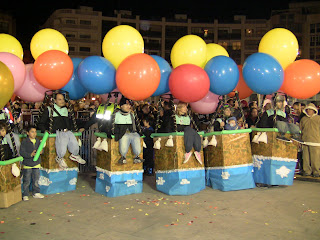 On TUESDAY, 8th, the "Burial of the Sardine" takes place. The procession begins at 21.30 starting at Plaza Mayor, through the Old Town to the Poniente Beach where the sardine is ceremoniously buried on the beach to signal the start of Lent. This will be followed by a fire work display.

Next Year, 2012, the parade will be on Saturday 18th February (Saturday before the beginning of Lent as Easter is on 8th April)- so if you want to join in the fun mark your diary now !!!!