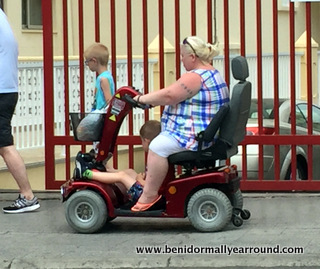 The Segway originated in America but is now popular worldwide – and Benidorm is no exception. Unlike the mobility scooter, which you sit on and is almost out of control here – the Segway is a 2-wheeled electric vehicle which you stand on... hence doesn't appeal to those that hire mobility scooters purely out of sheer lasiness and as a cheap mode of transport, often with children 'hitching a lift' therefore making it difficult for the genuine users. 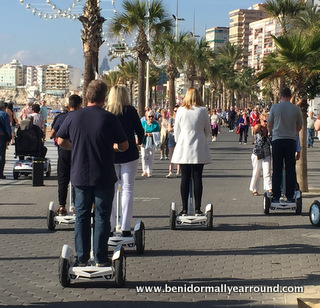 You will see Segways around the resort but be careful who you rent them from. Just as there are counterfeits with everything these days, be warned that there are also inferior Chinese imitations about. A genuine Segway costs around €7000 whereas reproduction ones made in the Far East sell for as little as €1000, which is still an incredible amount of money, but a fraction of the real cost. There are allsorts of hazards with the cheap copies and last years craze of imitation hoverboards spontaneously combusting and catching fire highlighted these dangers very clearly. 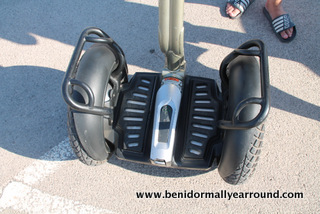 There is no brake or accelerator and the vehicle works on body balance, allowing you to literally float around the city! You can book to go on a guided tour and there are two routes available in Benidorm with the legal and fully insured company we recommend: The City tour which starts along the Levante promenade, covers the Old Town, including the Bull Ring and Aiguere Park or the scenic Sierra Helada Natura Park tour, which also starts on the Levante promenade then heads up the mountain, where you see the Roman mines, watch tower and isolated coves.. if you've ever wanted to go up to the cross but not fancied the walk then this is one way! 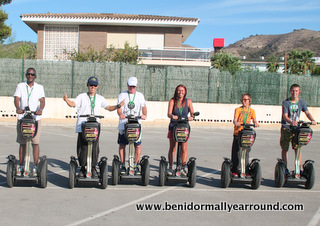 The group meets in the car park of Benidorm Palace – a large safe location specifically chosen as it allows everyone to get use to the Segway before going out among the public. There is a morning tour – starting at 10am, an afternoon tour, which starts at 5:30pm and until mid September a night tour, starting at 9pm.

Everyone is given a safety talk and encouraged to wear a helmet and protective knee and elbow shields – which are provided, although not compulsory. The only restrictions is that you have to be over 38kg (nearly 6 stone) but under 140kg (22 stone) – the machine has a weight sensor, which only activates within these parameters and be over 14 years of age. 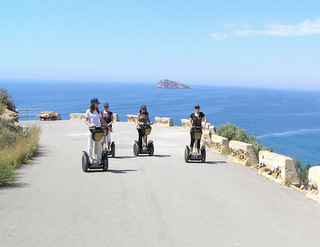 The tour is conducted through wireless earphones, which each member of the group is equipped with. This enables the tour guide to point out things of interest along the way without having to shout above the noise of the traffic. It only takes a few minutes to get accustomed to the sensation of what feels like floating in the air.

To accelerate you tilt your body ever so slightly forward and tip the handlebar to the left or right to steer. There is a max speed of 12 mph and you can feel a pulling sensation if you try and go faster to slow you back down. Everyone is given a safety sheet that they have to read and sign – there are some things which you don´t think of such as low overhanging branches or potholes and uneven pavements. 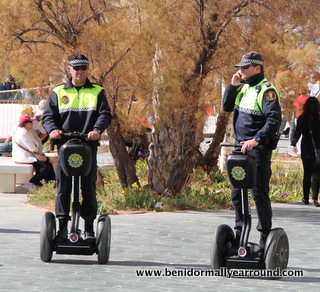 Up until last year even the local police used Segways and could be spotted whizzing up and down the promenade –however now they tend to get about on motorbikes. The Segway tour lasts around 2 hours and is a superb and alternative way of site seeing and the company is fully insured. If you are interested in having a go we can arrange a day and time slot to suit you - just email us at: This email address is being protected from spambots. You need JavaScript enabled to view it.