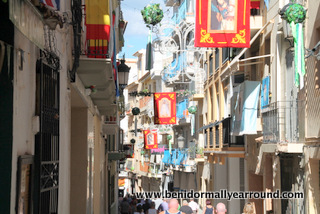 Fiestas feature strongly in Spanish culture and every year towns and villages up and down the country celebrate at various times of the year - and Benidorm's is virtually upon us. The annual fiesta is a celebration of the local Patron Saint, which for Benidorm is the Virgin of the Sufragio and San Jaime Apostle (they have two) and religion features heavily. The event dates back to 1740 when an image of the Virgin was found in the remains of a burnt out fishing boat, which was taken up to the church. A re-enactment of this is played out every year on the Poniente beach on the first official day of the fiesta – which is this Saturday, 12 November at about 5pm followed by a procession up to the San Jaime church at the top of the Old Town. 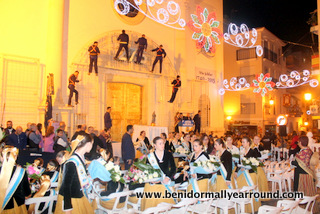 What seems like the entire population of Benidorm takes part, carrying flowers and the front of the church is decorated with them. It is incredible to watch the flowers being placed by what looks like rock climbers suspended from a giant grid that holds the flowers – but they are attached to safety harnesses. It takes hours to complete, with each bouquet stripped of the cellophane wrapping before being handed up and I’d certainly recommend you go and watch. 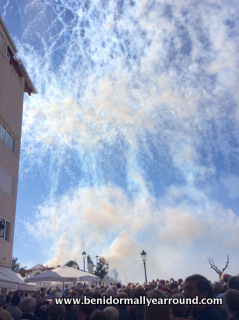 There are special prayers and church services throughout the 5 days fiesta and every morning cannons will be fired at 8am and at 2pm in the Plaza Triangular, which is at the top of the Avd Mediterraneo, masceltas – Spanish firecrackers are set off, but be warned, they are very loud! The streets are transformed, particularly in the Old Town and are decorated with flowers whilst religious paintings are hung from the balconies.
Monday 14 and Tuesday 15 are official Bank Holidays in the town and banks and government offices will all be shut.

There will be bell ringing, open air concerts, bands playing and flower offerings over these days and each evening the locals will be partying – often into the early hours of the morning so don´t expect much sleep, especially if staying in the Old Town! On Tuesday evening there is a ‘humour’ parade, when each penya choose a theme, often a political caricature similar to Newzoids or for those slightly older, Spitting Image! A big incentive is the prize money awarded to the winning group - €1,200 for first place and down to €200 for fifth. 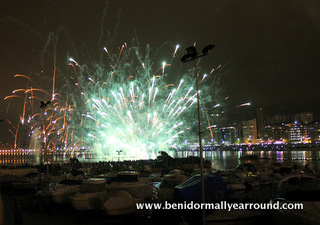 Wednesday 16 is the final day, with a grand float parade through the Old Town, setting off at around 5pm from Dove Park and finishing at the Plaza Triangular. Sweets are thrown from the floats so go armed with carrier bags like the Spanish! Then the grand finale is a magnificent firework display, set off from the Poniente beach – in front of Dove Park at around 8:30/9pm. Spectators gather in their hundreds and a good vantage point is up at the Mirador where there is a real party atmosphere. Then the following day is the one which most of the Brits have been waiting for – British Fancy Dress Day.