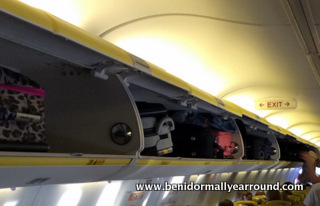 Many holidaymakers, especially those only coming to Benidorm for a long weekend, opt for hand luggage only for speed of disembarkation on arrival. But with limited space in the overhead lockers, tempers are often raised when travelers find no room left.

A standard aircraft has space for approximately 90 pieces of hand luggage of the specified size, although no doubt everyone has witnessed passengers with far bigger coming onboard. The subsequent delays in trying to find space often results in time slots being lost and so departures delayed. 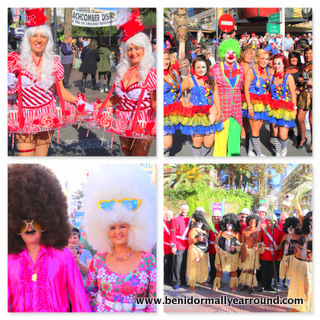 Ryanair, a favourite for many traveling here to Benidorm via Alicante airport have just announced a new policy, which will come into effect from November 1. Those booked to come over for the Benidorm fiestas and British Fancy Dress Day on Thursday 16 November take note. Standard passengers will only be able to take ONE small bag onboard, meaning their second bigger wheelie cases will go into the hold – but FREE of charge. 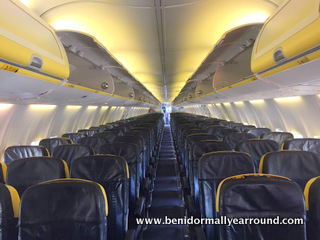 The result is that only priority boarding customers or those on a Plus, Flexi Plus or Family Plus fares will be allowed to take two carry on bags on board.
If you want to continue as you probably have up to now, you will have to purchase priority boarding, at a cost of £5 and that will enable you to take two bags into the cabin. There is an option to add priority boarding for £6 up to one hour before the scheduled departure. 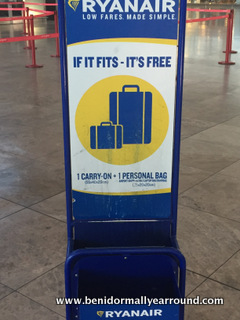 The low cost Irish carrier have also increased the checked in luggage size – from 15kg to 20kg and reduced the price from £35 to £25 to encourage more people to check baggage in. The airline has repeatedly threatened to review its second bag policy after numerous passengers have continued to abuse the size restrictions.

There are luggage cages at all check in desks which allow passengers to check that their pieces adhere to the sizes, but rarely used. Only this week there was a piece in the press after a two passengers were 'forced' to sleep on the floor at Alicante after the daughters hand luggage was deemed too big and they said that they did not have any money to pay for it to be checked in until the following day! 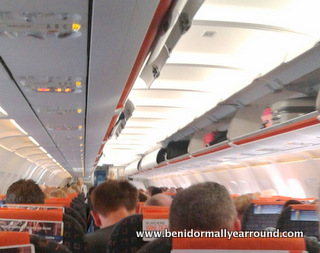 In comparison, Easyjet have launched a new ‘Hands Free’ service allowing passengers to check their hand luggage into the hold at a special bag drop area before reaching security for a £4 charge. These bags will have a priority tag so in essence be first to hit the luggage belt on arrival. The scheme was allegedly successfully trialed in France and being rolled out to all airports except London Gatwick. 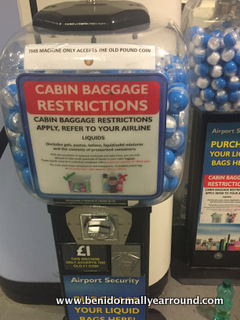 Airport security is already fraught enough especially with the 100ml liquid restriction, bought in after the 9/11 attacks. All liquids have to be placed in clear, resealable plastic bags which some airports hand out for free whilst others have vending machines and charge for them... £1 at Birmingham International - yet another way of extracting even more money from travelers.