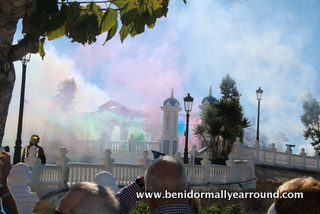 November is fiesta time in Benidorm, a celebration of the towns Patron Saint - "La Virgin del Sufragio". There are five days of celebrations – they certainly don't do things by halves here and today was officially the Day 1. All the events are concentrated in the Old Town – where the streets are transformed with bunting and embellished with floral decorations and Holy Artwork hanging from the balconies. 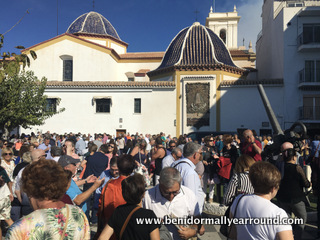 Religion plays a major part of the fiesta and almost every day there will be a mass held at the blue domed San Jaime church – located at the top of the Old Town at the Mirador followed by Solemn processions through the streets. A mass was held this morning followed by very loud fireworks let off from the Mirador at 12 noon. 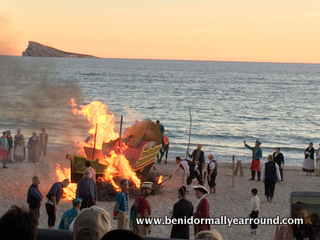 Everyone then marched down to the town hall square where all the participating bands played. After a break for lunch things moved down to the Poniente beach for a re-enactment of the finding of the Virgin in the burnt out boat. The story was broadcast over a loudspeaker in Valenciano and Spanish – maybe one year they may think of doing it in English for all the visitors! 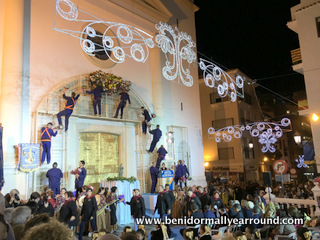 It was very visual to watch and saw the arrival of three horses and then the boat set alight. Obviously no occasion is complete without fireworks and a short display was let off before the next stage of the evening. All participants, along with fiesta queens in their beautiful dresses gathered at the beginning of Dove Park for the floral offering – each carrying a bouquet of flowers. 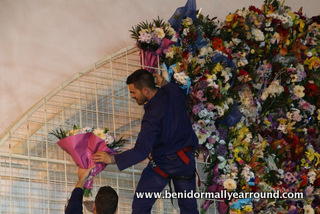 Accompanied by the numerous bands, they all made their way to the San Jaime church, where the flowers were placed around the front of the church on a specially constructed metal frame. It was a long process and took literally thousands of flowers.