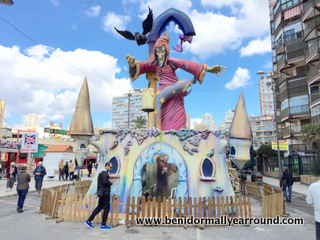 You may well have heard the term ‘Las Fallas’ here in Benidorm and wondered what it is. Well it's an annual 5 day celebration marked in the province of Valencia between March 15-19, with the grand finale on the night of the 19th – which is a bank holiday here. The focus for many is the creation and destruction of the "ninots", which are HUGE paper-mache models. 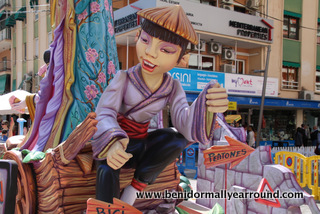 They cost tens of thousands of euros and take almost the entire year to construct by the various penya's. The biggest and probably best Fallas take place in Valencia, but all towns in the province will have them. Every year Benidorm has three; in the Rincon, Plaza Triangular and in the Old Town but in Valencia there are hundreds, located at almost every crossroad in the city…it becomes a no-go zone for cars! 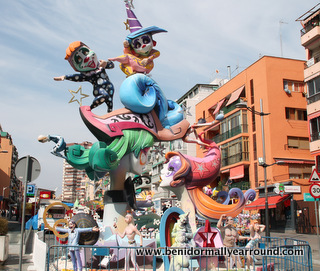 Many of the models are several stories tall and need to be moved into position by crane. The themes are varied and satirical, reminiscent of the 80's British comedy Spitting Image or more recently Newzoids, where many of the models are caricatures poking fun at Spanish politicians and celebrities.
The ninots, or models remain in place until the 19th, which this year falls on Monday and when the burning - or in Spanish "La Crema" takes place, which is the highlight of the fiesta. 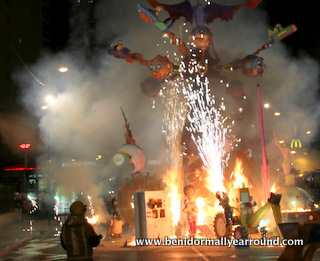 During the early evening men with axes chop out chunks around the base and stuff them with fireworks and nearer to the burning will pour over with lighter accelerant. They wrap strings of fire crackers around the models trailing it a safe distance away and this will be the starting point of the lighting. 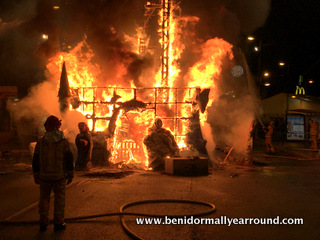 The Bomberos, or fire brigade are out in force this evening and kept very busy. The boys are all set with hoses in hand and wet down the nearby trees and the road which would most definitely be banned in the UK due to "Health and Safety". The children's Fallas are burnt first - starting at 10pm then at midnight the main adult ones are set alight. But be warned - the heat coming off is really intense. As much as you'll want to be at the front, once they set light you will be edging backwards quickly!
For those that plan on joining in for the Benidorm Fallas the highlights of the programme are follows:
On Thursday 15th the Fallas are erected into position - this is known as the "Planta".
On Friday 16th at 7pm there is a parade of the fiesta queens followed by mass in the San Jaime church.
Saturday 17th the music band parades in the streets around all three Fallas starting at 10.30am in the Rincon.
Sunday 18th at 6pm there is the "Flower Offering to the Virgin of the Suffrage" going along the Avd Mediterraneo and ending at the Plaza de San Jaime.
Monday 19th .... the main and final day. At 6pm there is a big parade of floats along the Avd Mediterraneo ending at the Plaza Triangular – by McDonalds.
Then at 11pm is the burning of the Children’s Fallas: 12 Midnight burning of the Falla in the Ricon: 12.30am burning of the Falla on the Plaza Triangular and lastly at 1am burning on Calle Tomas Ortuno. Wrap up warm if you plan to go.