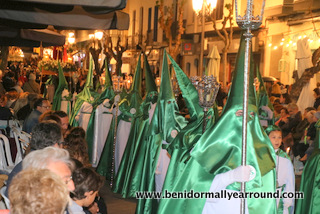 Tonight’s religious Good Friday procession through the streets of the old town attracted thousands of spectators, who lined the streets along the entire route. The resort is extremely busy with Easter visitors at the moment and some hotels have even put up ‘full’ signs.

There was also a very visible police presence, including National Police armed with machine guns, which some British holidaymakers found quite startling. But there is nothing to be worried about, security is always stepped up at such events with high volumes of people. 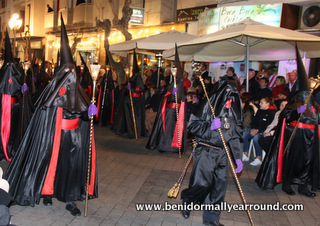 Many of the Brotherhoods from churches across Benidorm took part in the procession this evening as well as the mayor and all the councilors. It started from the San Jaime church at the top of the old town, winding down the narrow cobbled streets with the ‘costaleros’ carrying the magnificent “Paso” – heavy floats with sculptures depicting the Sorrows of the Virgin Mary and Jesus on the cross. 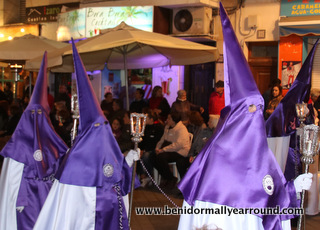 These were followed by the ‘Nazarenos’ or ‘penitentes’, wearing long robes and pointed conical hoods, known as ’capuchas’ to disguise their identity. Each brotherhood wears a different colour and although it startles the Brits, there is no sinister significance and it dates back hundreds of years. 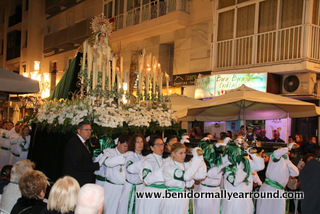 Marching bands also accompanied each of the floats, adding to the occasion and the crowds broke out into spontaneous applause as they passed. It is a tradition that has been taking place for many years, not only here in Benidorm but also in many town and cities across Spain. 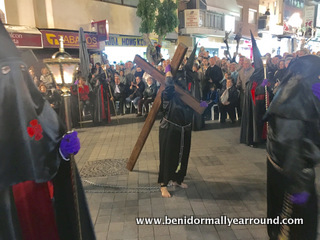 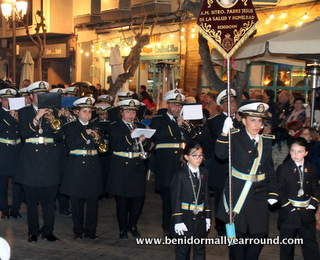 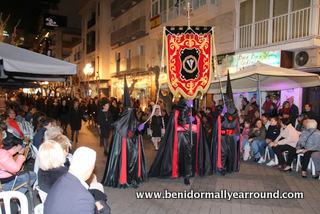