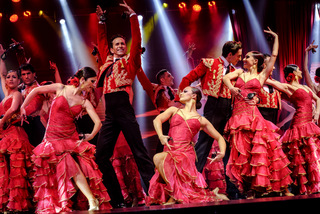 Benidorm Palace has undoubtedly surpassed itself yet again with their new show ‘Alegrias’ bringing as the name suggests joy, happiness and exuberance to the stage. It is all about fiestas in different places and mixes modern with traditional. 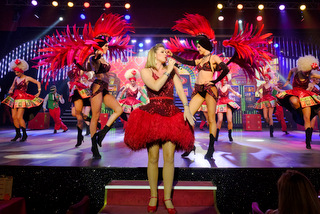 From the moment the lights go down it’s full on and will leave you spellbound with the energy, colour and passion delivered by the troupe of performers. There isn’t time to draw breathe as one number seamlessly blends straight into the next with no gaps between one part and the next. 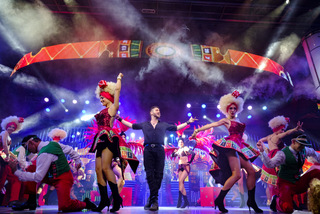 Many of the numbers give a feeling of audience interaction, with dancers appearing from the auditorium and weaving their way up to the stage. The opening casino inspired number is full of glitz and incorporates singer Amy with the dancers, making it into a cabaret style show – something new which works very well. 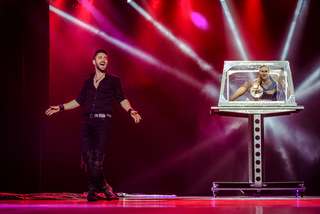 Even illusionist David Climent appears on the stage in the oepning number. His new routines are fast paced and delivered faultlessly, leaving many open mouthed and enthralled as to how he manages it. After watching him it is easy to understand his prestigious invitation and acceptance into the world acclaimed Magic Circle.

This year David Moore, the Artistic Director has designed the show in a way that the speciality acts come out and are incorporated with the dancers, to break away from the normal curtains closing and opening, which can ruin the momentum. 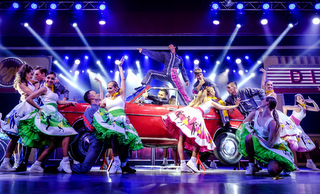 Paying homage to the 40th anniversary of Grease, the nostalgic rock n’ roll high school musical which starred John Travolta and Olivia Newton-John, the scene is recreated, complete with a gleaming red car. The girls in their bobby socks and full circle skirts will have you tapping and singing along to the iconic numbers we all remember so well! 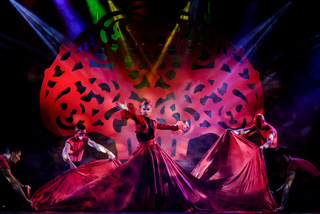 The dance troupe are a mixture of nationalities, including many British girls in the line up. Every year the two Davids – Climent and Moore organise dance auditions in London and Manchester to recruit new dancers, with competition fierce to win a place. 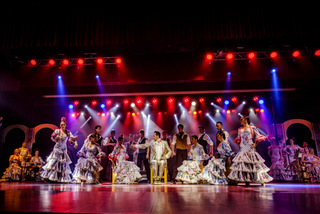 They make up the international group, who take the lead and are at the front on the modern routines whereas the Spanish girls take front stage on the traditional flamenco numbers, involving beautiful sweeping arm movements. Javier, the profesional flamenco soloist from Malaga is back, strutting his stuff and putting passion into his vigorous rhythmic foot-stomping, which goes on for many minutes whilst the ladies look on admiringly, with handclapping and shouts of “olé!” for encouragement. 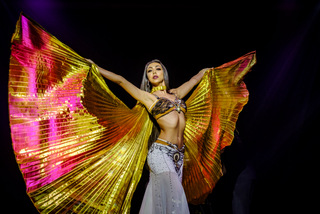 As always - and now to be almost expected, the costumes are truly a work of art, all hand made on the premises. There are so many changes throughout the evening, all totally different from the previous leaving the audience to wonder what is coming up next. 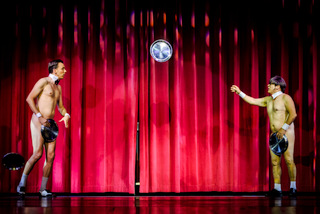 The guest artistes are all captivating, from juggling to a comical nude frying pan sketch and the incredibly talented strong men, who perform in slow motion have the audience on their feet applauding at the end of the routine. 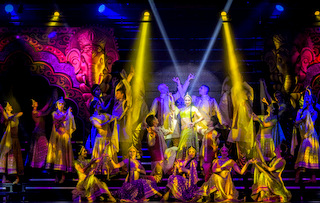 The second half of the show opens in dramatic style, with emphasis on Spanish flamenco and some beautiful gypsy style dresses complete with flowing ruffled trains that the girls expertly manouvere. The show then moves continents and heads to Bollywood for the first time in its history, with dramatic staging and sari-inspired costumes and music. 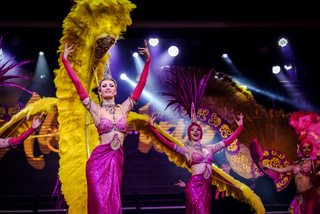 The finale, as always is a real show stopper, with plumes of feathers and glitter and exactly how a show should end. No attention to detail is spared, even the make up and wigs perfectly complement each segment and style. 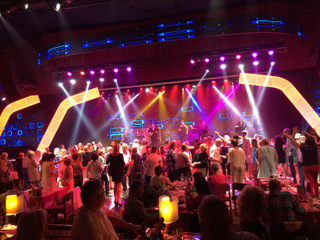 The service throughout the evening is faultless and those who experience the full package, with meal and wine throughout, including cava are certainly left more than impressed with the superb quality. The resident band gets everyone up and dancing during the interval and those that just want to come for the show should arrive by 10pm. Benidorm Palace should certainly be on your list of places to go.